PLODDING AT RANDOM ACROSS THE PLOUGH (PLOW TO U.S. READERS)... 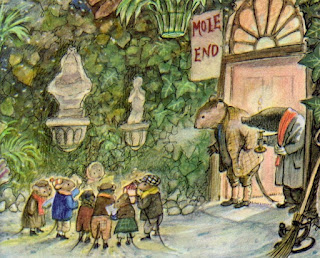 Anyone who's read The WIND In The WILLOWS by author KENNETH GRAHAME will surely be familiar with the chapter entitled DULCE DOMUM, in which MOLE and RATTY are returning home over the fields (after a day out with OTTER) one winter evening near Christmas.  Suddenly, Mole senses his own home which he'd 'abandoned' months before to stay with Ratty (come now, we won't be having any of that kind of innuendo - their relationship is purely platonic), and feels compelled to visit it again.  It's a very touching episode, and speaks about the importance of having one's own place to return to, and the comfort which can be derived from being able to reconnect with one's 'roots'.

I feel like that about every house I've ever lived in.  They call to me, plead with me to return for a visit and relive the memories associated with the times I stayed there during my childhood.  I've mentioned before that, whenever I'm in any of my former neighbourhoods, I almost feel that I could stroll up the pathway to whichever old home it happens to be, insert my key in the lock, and go inside to find everything as it was in 'my day'.  It's an instinct.  I recall that, late one dark night in '83 or '84, I was walking my dog TARA (not to be confused with her successor ZARA) along one of my old streets, when she turned in at the steps of the house we'd left several months before, glanced 'round to see if I'd caught up, and made to ascend the few steps to the pathway leading up to the door.  Instinct (and memory) y'see.  She seemed slightly confused when I walked past and called her to my side.

Like I said, it feels like the most natural thing in the world to me to walk up the path to any of my former abodes as if I still inhabited them, presumably due to a similar 'instinct' to that which animals possess.  (At least, that was my defence in court when I was charged with several counts of attempted burglary.  Relax, I'm joking.  I just claimed it was a case of mistaken identity.)

Tonight, I again felt the 'summons' to revisit the house and area where I lived between 1965 and '72, and I was all ready to do so when I remembered how many changes had occurred in the last 30 years (which seems like only 3 or 4 to me). The alterations had taken place incrementally over a prolonged period, until they eventually overwhelmed some aspects of the street and the surrounding environs, to such an extent that revisiting is not entirely the happy experience it used to be. I want to see the place as it was in my day, not the place it's since become, and which sours things for me to an extent.

So I resisted the call, and instead entered the past via the portal of modern technology - namely my computer.  I have large folders of photos (and some video footage) of how the area used to be in younger and better days, the same as when I lived there, and I found my 'virtual' visit almost as satisfying as my actual ones before the face of the landscape had been altered, in many ways, almost beyond recognition.

Any fellow Mellows do this sort of thing, or am I the lone inmate in an asylum of my own construction?  ("Trapped... in a world he DID make!" would per-haps be the comicbook subtitle.)  Feel free to say I'm bonkers in the comments section - but be polite about it.  (You know what a sensitive soul I am.)