DO YOU BELIEVE IN GHOSTS, MR BLUNDEN? 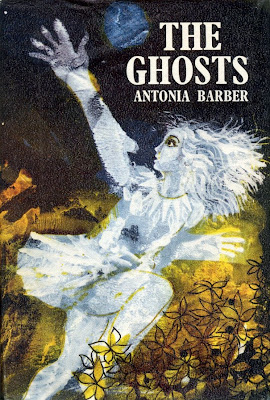 Long ago and far away, in a time and place which now seem to have existed only in dreams, I read a book called The GHOSTS, by ANTONIA BARBER.  I was around eleven or twelve at the time, and I enjoyed it so much that, an hour or so later, after returning home from a trip to the shops with my family, I read it all over again.

Contrary to what the title suggests, the book isn't really about ghosts, it's about time travel.  Not in a science-fiction way though, but rather in a kind of mystical, magical fashion, which isn't explained in any detail.  A couple of years after reading it, a film version was released, called The AMAZING Mr. BLUNDEN, starring LAURENCE NAISMITH and LYNNE FREDERICK. (To say nothing of the usual complement of stalwarts from the British acting community, like JAMES VILLIERS, DIANA DORS and MADELINE SMITH, to name but a few.

The book was set in what was then present-day 1969, with two children travelling 100 years back in time to save two other children who had perished in a house fire.  However, for some reason, LIONEL JEFFRIES, the screenwriter and director, set it in 1918 instead.  It's not a bad little movie, and is well-worth watching for the delightful performances of James Villiers and other members of the cast, though I was slightly disappointed to find that some dialogue in the book which had made me laugh out loud was absent.

I find it interesting that the film was in production around the time I was reading the novel on which it was based, although I didn't get to see it 'til about thirteen or fourteen years later.  (About half my life away at the time.)  However, I remember seeing the trailer on television back at the end of 1972 and instantly recognising, despite the different name, the source of this new cinematic production.  Also, the book had only been written about two years before filming began, so full marks to Lionel Jeffries for recognising its potential straight off the mark. 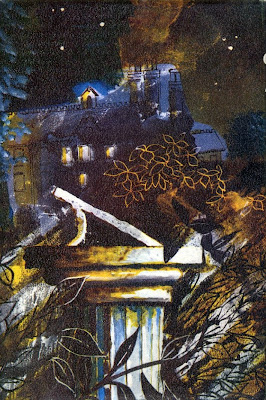 There's a passage in the book where one of the children, in the present day, is exploring the burnt-out country house that she experienced 100 years in the past (when it was still in its glory), and she recognises some of the items lying around the now deserted and dilapidated rooms.  Here is what it says:

Old clothes, old clocks, old toys, old books, which had once been swept along on the strong current of everyday life, now lay in corners like the tide-wrack along the beach, serving only to show where life had been.

All these things had been cherished once for their beauty or their usefulness, or just for the warm familiarity of their presence.  Now they were cast aside and forgotten.

As someone who has spent over half his life in re-acquiring once-cherished treasures that had fallen victim to time, there's something about the phrase "the warm familiarity of their presence" that really resonates with me.  Its an ex-tremely comforting feeling being surrounded by the familiar, because then the past doesn't seem so very far away and, consequently, the illusion can be maintained for a little longer that the end of life's journey isn't quite so near as is actually the case.

So, if you haven't already done so, read the book and see the movie - and may all your 'ghosts' be familiar ones.

TOO MANY LINKS, TOO LONG A CHAIN... 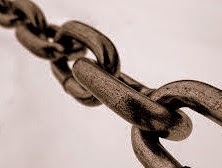 Being of an artistic bent (stop it), I've been useful over the years to quite a number of people.  "Gordon, my boss/manager/teacher/pastor has put me in charge of organising the advertising/posters/illustrations/publicity for our upcoming jumble sale/Christmas party/school reunion/rally and I thought of you.  Could you help me out by doing me a banner/cartoon/diagram/map to help raise people's awareness/interest/curiosity/attendance?"  Then they call up another poor schmuck to talk them into doing some other aspect of the task assigned to them, while they sit back and take the credit for the fruits of other people's labour.

This chain of events usually operates in descending order, with one person being assigned the task, who then asks someone else to arrange it all, who then asks someone else for help in some area of said task, who then asks various other people to do the actual work.  Too many middle-men in my opinion.  The person who initiates the process should earn their wage  by making themselves aware of exactly who can do the job required and contact them directly.  Then all the useless people whose only area of expertise is knowing someone else capable of doing their work for them could be eliminated from a needlessly long process.

Someone I know who works for a design/ad agency was once tasked with thinking up a name for an in-house magazine for one of their customers and asked me for ideas.  I thought for all of two minutes before coming up with one that the person was delighted with.  I was told later that the customer was also delighted, and no doubt lots of cash changed hands.  I never saw a penny and received nary a thanks, yet was given the distinct impression that I should regard my invitation to 'participate' as being accorded a great honour.

Local government seems to operate on this principle.  Just think of the dosh we would save taxpayers if we could eliminate all the pointless levels of bureaucracy whose only purpose in the overall scheme of things is to get other people to do the job that they can't do themselves.  It's the old, old story, I fear - 'too many Chiefs and not enough Indians'.  Got any examples of such instances that you'd care to share?  The comments section awaits.

THE CURIOUS CASE OF THE VANISHING HA'PENNY... 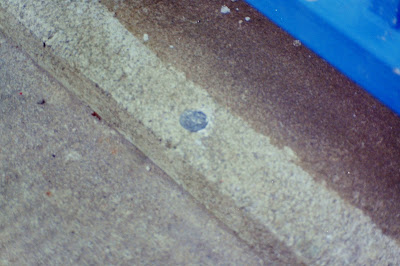 When we lived in a neighbourhood called WESTWOOD in the 1960s, the bridge over the main road across from our house had a 1939 ha'penny (pronounced 'hayp'nie' - in my neck of the woods anyway) embedded in the concrete of the far-side ramp.  Whenever we crossed the bridge en route to the bus stop, I would gaze at that ha'penny and wonder who'd 'planted' it.  One of the workies who built the bridge, perhaps, or some kid who'd managed to set foot on the ramp before the concrete bed from which the railings protruded was completely set?

Later, when crossing the bridge on my way to secondary school on the other side of the road, I couldn't pass that ha'penny without looking at it and sometimes even touching it for luck.  Believe it or not, that coin was a well-known local icon for 30-plus years, and I don't think there's anyone I know from the area at that time who wasn't aware of it.  Even today, I hear folk reminiscing about "the ha'penny on the bridge".

Then, around 17 years ago, the ha'penny suddenly vanished from its accustomed spot.  The indentation where it had once been remained visible for years afterwards until fairly recently, when a cosmetic repair job was done on the bridge due to having fallen into a state of disrepair over time.  In fact, I'm not entirely sure that the circular impression isn't still visible - I'll have to check the next time I'm in the area.

I should add, in case I've given you the wrong idea, that the bridge wasn't anywhere near as old as the coin.  (It had either been completed just shortly before we moved to the area in '65, or was erected not long after.)  Old currency was still in circulation up until Decimalisation in 1971, and even then, a few coins were in use alongside their decimal equivalents for many years afterwards.

So what happened to that 1939 ha'penny?  (Just think - SUPERMAN had not long made his debut when the coin was minted, and BATMAN was just about to take his first bow.)  Well, as it happens, I'm in a position to tell you.  Here, for the first time anywhere, is the scoop on the fate of that renowned coin, whose disappearance has puzzled and disappointed old-time local worthies in equal measure for close to two decades.


NOW IT CAN BE TOLD! 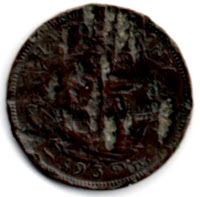 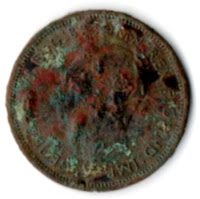 Exposure to the elements for over 30 years had left the coin - and the concrete setting which housed it - in a sorry state.  I knew at some stage the bridge would have to be patched up in places, and it occurred to me that the coin would then probably disappear under a new concrete skin, never to be seen again.  And there was also the risk that, with the ongoing erosion of its concrete surround, it may well become detached from its moorings and cast into oblivion by the winds and rain.

So, on June 5th, 1996 (for the historians amongst you), at half-past midnight, I was driven to the bridge, whereupon I liberated the captive ha'penny by careful application of hammer and chisel - with a single blow - and took it home with me, where it yet resides to this day.

So, there you have it!  Any long-term locals reading this who may have wondered what had happened to that iconic ha'penny need wonder no more.  It's safe and sound in a secret hideaway, where I can take it out every now and again and remember it in its heyday as a neighbourhood landmark - whose presence everybody and their granny acknowledged whenever they passed it in its home on the Westwood bridge.

However, in the spirit of unselfish generosity for which I'm justly famous, I herewith share some pictures of it with you now.  Not just the side which countless locals observed in their daily perambulations across the bridge, but also the face which kissed concrete for more than three decades before I rescued it from an impending and inglorious fate.