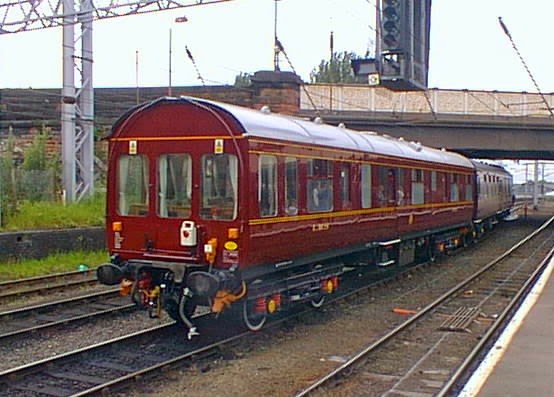 If you suddenly awoke from a deep sleep to inexplicably find yourself embarked on a train journey, destination unknown, you'd probably be startled and wonder "Where the hell am I and how did I get here?"  Seems an obvious reaction, right?  You wouldn't merely open your eyes and gaze out of the carriage window as though you expected to find yourself in transit like it was the most natural thing in the world, would you?

In contrast, when fully-functioning consciousness (i.e. sequential thought and memory) first dawns within us as children and we become able to recognise our surroundings and the people around us (when we 'wake up' in other words), we simply take it in our stride and don't seem in any way surprised or perturbed by the situation.  Not until much later do we start asking philosophical questions about why we're here and where we're going in this unplanned (at least from our perspective) journey we call 'life'.  Yet, essentially, the two situations are the same - so why such different reactions in each case?

This has always puzzled me, as has the fact that when we first become 'aware', we have no sense of never having existed - nor do we have one of having a specific beginning.  It's as if, in some mystical, magical, inexplicable way, we've always been - and that we always will 'be'.  Life soon enough erodes the gossamer foundations supporting the illusion of immortality - at least as far as the physical goes.

As for the 'spiritual', I'd like to think that my consciousness will somehow survive the expiration of my physical body, but a nagging doubt assails me.  You see, our conscious selves give every indication of being inextricably bound to our physicality, seem entirely inter-dependent.  Therefore, since that which we regard as the 'soul' (personality, individuality, etc.,) doesn't appear to exist separately before birth, why should it continue to exist on its own after death?

'Tis said that it's better to travel hopefully than to arrive (to paraphrase Robert Louis Stevenson) - but if hope should disembark at an earlier stop, the remaining miles can make the trip a lonely one.  And what awaits us at the end of the journey?

I wish I could supply you with some profound and constructive conclusions to my meandering musings, but I find myself ill-equipped for the task.  If you have any pertinent observations you'd like to  make on this subject, the comments section awaits your input.