THEY SAY YOU CAN'T GO HOME AGAIN - BUT DO YOU EVER TRULY LEAVE? (UPDATED)... 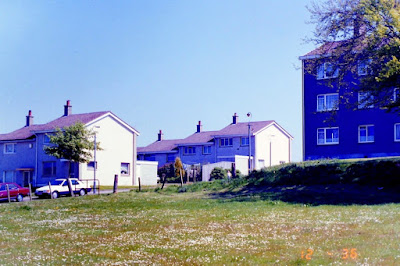 A few years ago, I was walking past one of my former homes and observed a family (who had just exited a vehicle) walk up the front path and go inside.  The family consisted of mother and father and two young sons, the same as my own family when we'd stayed in the house.  I couldn't help but wonder if the two kids would one day look back on their time there with the same fondness as I did, or have the same sense of atmosphere - or to be more precise - sense of the same atmosphere as I had.  That's probably unlikely, because different furniture, different fashions, toys, TV programmes, comics - all the things which add to the flavour of one's life when growing up - surely affect the perception that different people at different times will have of the same place.  Also, a new church had been erected on the site of the old one (which had only been built in 1965/'66 and was demolished around 1991 due to structural defects) across from the front of the house, and amenity flats for the elderly now filled two thirds of the playing field across from the back, so even the views from the front and rear windows were no longer exactly the same, which no doubt affects the 'sense' of a place.

Another thing that occurred to me to wonder about is who exactly has more of a sentimental 'claim' on a specific house years after the fact.  The ones who have the fondest memories, or who lived in the house first, or longest, or last - or some other arbitrary factor?  I must confess that I'm a bit flexible in my own approach when it comes to that.  I regard every house I've ever lived in as 'my' house, but my justification differs from house-to-house.  For instance, my family lived in the previous house to this one for four years, and we were the first to live there as it was a brand-new house.  However, the current family who reside there have done so for around 28 or so years and now own the property, so, legally, the house is theirs.  That doesn't matter to me though - I lived there first so in my mind it's mine.  Contrariwise, there have been homes where we weren't the first to inhabit the premises, but we lived there longer than the previous tenants (if not the subsequent ones - or vice versa), so I still regard myself as having a preeminent 'stake' in them.  Yes, you're right - I just make the 'rules' up as I go along to suit myself.  What is it that drives my unwillingness (my inability even) to sever the ties with, the sense of 'ownership' of, all my former domiciles so long after the fact?  Is it simply because happy periods of my youth are inextricably linked to them, and to give up my feelings of connection would be to abandon - reject - those periods?  One for the philosophers perhaps.

How do you feel about your previous homes, fellow-Mellows?  Have you left them behind in the foreign country that is the past, or do the memories of them still loom large in your life and remain a never-ending presence in your day-to-day existence?  Do you yet regard them as 'yours', or have you long since given up any feeling of special connection to them?  Feel free to indulge yourself in the comments section.  Before you do, however, here's another thought that's just occurred to me.  If houses had 'sentience' of some kind and could have favourite tenants, how would you feel to learn that the favourite dwellers of one (or all) of your former abodes were not your family, but some other one from either before or after your term of residence?  Would you feel slighted by the knowledge or wouldn't it bother you?  I like to think (here in Castle Bonkers) that all of my former homes (and current one) regard my family and myself as the best occupants they ever had.  And who's to say me nay?
Posted by Kid at 12:46 6 comments: