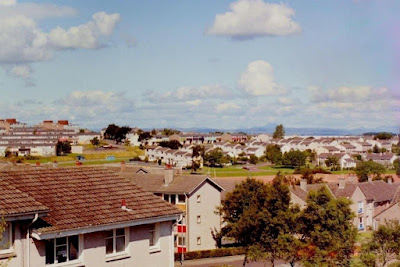 Something that occurred to me only recently is that when I was younger, I only ever looked out any of my windows for one specific purpose or another, never merely for the sake of it.  Things like, to see which of the neighbourhood kids were playing in the field across from my house, or to check what the weather was like, or to catch the approach of someone I was expecting a visit from, or to see what the source of some noise was.  I never, as far as I can recall, looked out of the window just to appreciate the view.  At school, I would gaze out of the windows and lose myself in dreams, but I wasn't really focussing on the scenery.

And now, having typed that, a couple of exceptions have just occurred to me.  I'd look out at freshly-fallen snow, because there's something magical about snow I'm sure you'll agree, and sometimes at night, me and my brother used to look out of our bedroom window at the lights of Glasgow (or its outskirts), twinkling on the far horizon like tiny, dancing fireflies or the glint of frost on the pavement when it catches the sun or the beam of a street-lamp.  I last saw that night-time scene over 46 years ago, though I've seen the view in daytime on occasional visits to my old home - the first of which was 30 years ago, and the last 27 years back.

I first became aware of looking at the view for its own sake during the countdown to my family (and myself) flitting from my present house to a new one back in 1983. For some reason it filled me with sadness to realise, as I gazed out into the familiar distance one evening, that I would probably never see twilight again from that bedroom window and that an era was passing.  (Melodramatic?  Me?)  Of course, as many of you will know, just over four years later, we moved back to this house, and I was reunited with my old room and the former view from its window.  Strangely, although I'd never wanted to flit to that new house, I now find myself even missing that view, and I'm glad I took quite a few photos of it in the four-plus years we resided there.

Views can change however, as mine has to a certain extent, what with new houses and flats being built on 'spare' ground.  Of course, it was never spare (or 'under-developed' as the local council later categorised it), it was intended for recreational use, and to alleviate the monotony of the brick and roughcast-bedecked structures surrounding it; to provide a welcome oasis of greenery amidst the grey 'sentinels' which stood on its borders, and to provide a sense of space in what has now become an overcrowded concrete ghetto.

Do you ever think back to once familiar views you knew in your youth, readers, and wish you could return and see them again, even though you know that the harsh reality of time and so-called 'progress' consigned them to the phantom mists of history long ago? Feel free to relive those bitter-sweet memories in the comments section.