RAMBLING REFLECTIONS OF THE RATHER REMOTE KIND... 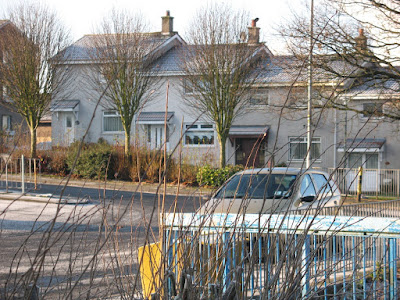 When you're in your early 20s, you feel as if you've been around forever and can't even conceive of a time when you didn't exist.  You know there was, of course, but it just doesn't feel like it.  (The same thing could probably be said whatever age you happen to be - at least in my own experience.)  I'd lived in five different houses by the time I was 20, and due to the furniture being the same from house-to-house, they all had pretty much the same ambience.  In memory, therefore, those houses (the four I remember anyway, as I was only one-and-a-half when we moved from the first one) are preserved in amber, as there were no significant changes in their furnishings during our time of residence in them.  (The occasional addition, but no deletions.)

When I first moved to my current home it was the same, but eventually (several years in) some furniture was disposed of and replaced, and the house now no longer preserves the 'vibe' it once had, the interiors having evolved a different look and feel to that of my earliest years here.  It now has a different 'personality' (while still retaining a few remnants of its old one), and its current ambiance no longer precisely matches that of any of our previous residences.  I therefore often find myself casting my mind back to earlier times, which isn't difficult considering the sheer volume of replacement toys, books, comics, and records I've managed to obtain that remind me of my early days.

When my gaze falls upon those doppelganger items from yesteryear, I find myself yearning to return to those times and places, and since the majority of my collection reminds me of one house in particular, I tend to find the notion of one day moving back there quite an attractive proposition, because they'd all be 'at home'.  The only trouble with that though, is that I'd be bound to miss the houses before and after whenever I looked at items that preceded and followed my residence in the home under discussion.  So while I'd feel I belonged there whenever I looked at a replacement comic or toy I originally owned at the time, I'd most likely feel out of place when I looked at a comic or toy from a later time in a subsequent house.

As I've said before somewhere, it's a case of missing what you don't have, but if you reacquire it, you then miss something else.  I miss my previous houses because I no longer live in them, but if I were to move back to one, I'd miss the others - including the one I currently inhabit.  That's why I moved back here 34 years ago after living elsewhere for over four years, having previously stayed here for 11 - I missed it and wanted to try and turn the clock back.  Now, strangely, I even miss the house I left to return here, though I didn't at the time - it took around 17 or 18 years for that feeling to finally kick in.

Anyway, I began this post several hours ago before getting distracted by other things, so I've now forgotten precisely where I intended to go with this.  All I know is that whenever I look at one group of toys or comics, the prospect of again living in the house I inhabited when I first got them seems extremely appealing to me, but having lived in a number of houses in my lifetime, I feel the same way about every former abode whenever I look at or handle other groups of items first acquired during my terms of residence in them.

I suppose posts like this aren't fair on you poor Mellows, due to the fact that if I don't quite know what I'm trying to say, then you can't be expected to either.  Hopefully you'll be able to make something out of it.