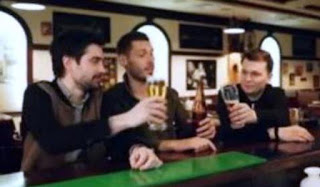 Three friends were sitting at the bar, by late hour undeterred,
"Pray tell me, lads," says I, "what are, the saddest words you've heard?"
"Could they be 'bar's now closed'," says one, "when ordering the drinks?"
"Or how about 'we're dry', my son,"  the other says, then winks.

"But no," says I, "the saddest sound that you will ever hear,
is two words very often bound with thoughts of one held dear.
See, once I loved a gal so fair - (in fact I love her yet),
with love that was beyond compare, though seasoned with regret."

"She loved a better man than I, saw me as 'just a friend',
and never knew for her I'd die, so I had to pretend.
Aye, pretend that she meant nothing and didn't hold my heart,
ah, but lads, the strain of bluffing almost tore me apart."

"If only she had needed me, as living things need air.
If only she had longed for me, I wouldn't know despair.
Another time, another place, who knows what might've been?
The look of love upon her face is what I might've seen."

"Despite my heartache I'll be brave, though no fate's worse than this -
to trudge through life towards my grave and never know her kiss.
The saddest words you'll ever hear (the anthem of the lonely),
come with a sigh and oft a tear - two whispered words... 'if only'."

TALKING OF LOCKUPS MAY GET ME LOCKED UP...


A couple of months or so back, I was along at one of my former neighbourhoods and decided to check out the lockups where my father once housed his NOBEL 200, and later, his first RELIANT ROBIN (well, someone had to have one).  Far too many of the lockups were in a dilapidated state, with doors hanging off or simply missing.  My local council are in the habit of demolishing lockups, which doesn't make sense to me.  After all, what with the lack of parking spaces outside houses nowadays, you'd think there's be a huge demand for lockups where people can keep their cars.

Over 30 years ago, when we first moved back to my current house (regular readers know the story), my father tried to re-rent his former lockup (not the one mentioned in the above paragraph - different house, different lockup), and was told that the council were no longer renting them out.  He persisted though, and was eventually given his old lockup back.  He had it for around six years before several of them (including his) were demolished to make way for new houses, but at least the council got six years of rent out of him, instead of the nothing they'd have got for leaving the lockup empty.

Perhaps the council thought that the cost of maintaining them was too prohibitive, but that cost should have been covered by the rent, and it seems daft to dispense with a means of raising revenue when pedestrians can hardly walk on the pavements these days because of two-and-three car families parking their vehicles up off the road.  (Talk about inconsiderate?)  But that's not the point of this post, which I shall now try and get to.

When I was along at the lockups in my previous neighbourhood (as mentioned several years back in the first paragraph), I saw a guy working on his car and commented to him about the condition of some of the other lockups and how I considered the situation to be a disgrace.  He told me that the council were going to renovate them, so if true, maybe they're finally learning sense, and realise that it will help alleviate parking problems while generating income at the same time. I pointed out my father's old lockup a few doors along, mentioning that my family had once lived in the area.  He informed me that it was Mr. Campbell's lockup, but was now being used by someone else.

I was slightly amazed by this, because the Campbells had been our next-door-neighbours when we lived there from 1965 to '72, which means that Mr. Campbell had most likely taken over the lockup right after my father had relinquished it when we flitted. The Campbells were living there when we moved in, having inhabited their house from around the early '60s when it was first built.  In fact, amazingly, they still live there today, all these many years later.  (Their kids have grown up and moved out, of course, but Mr. & Mrs. C still reside there.)

And so to the point (such as it is) of this post.  I just find it strangely significant (in a way that I'm not able to competently convey) that my father's lockup had been taken over by our former neighbour, thereby maintaining some sort of (admittedly nebulous) connection (in my mind anyway) between us and them.  It somehow seemed fitting that the next 'tenant' of 'our' lockup had been the next door neighbour, and was therefore not too far removed from ourselves.  (In a figurative way of course, as we no longer lived in the area.)

The guy who currently uses the lockup rents it from the Campbells and lives in my old house next door to them, so house and lockup are again reunited, which seems to me suitably appropriate.  Although it's nice to know that Mr. Campbell had it for all these years after us, I still tend to regard it to this very day as my father's lockup. And you know what?  I probably always will.  (Incidentally, the first three photos were taken around 30 years ago.)