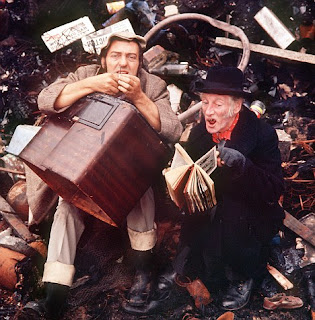 Here's a strange story for you, one that I suddenly just remembered while looking at the photo in a previous post (click here).  I'll say why in a moment, but the tale I'm thinking of dates back to 1964 or '65, when I was going home for my dinner at noon one day, and saw a 'rag and bone' man parked outside the primary school gates.  No horse and cart like STEPTOE & SON, but a blue or grey van with the back doors swung open to display his wares.  I enquired how long he was going to be there and he replied that he'd be 'on site' for the whole dinner hour.  So I ran home, had my grub, and asked my mother whether she had anything she didn't want that I could give to the rag and bone man.  Usually, all you got was a balloon on a stick, so they were actually not so much rag and bone men as 'con the kids out of stuff that's worth money' men, but my mother gave me one of her old coats to swap for a balloon.

It was a blue coat if I recall rightly, and off I set to school with it, but a funny thing happened on the way to the cruel place of confinement that tortures children with enforced learning that they neither want or need.  (Am I showing a prejudice here?) I started to feel sorry for the coat, and shame at my cold and callous attitude in being prepared to part with it.  I'd once felt like this before when a toy metal bus I owned suddenly separated in two because of a loose rivet.  I flung the bus on the grass and walked away, but was then overcome with a sudden remorse and rushed back and reclaimed it.  I felt like a parent abandoning a child, and the feeling was too much to bear.  It was the same with this coat - I simply couldn't give away a 'member of the family' to a stranger, so it sat under my desk until 3 o'clock and then I took it back home with me.

So readers - do you have any strange peccadilloes that you don't quite understand, but feel yourself in thrall to and are unable to resist?  If you'd care to share, you know where the comments section is.
Posted by Kid at 13:44 No comments: