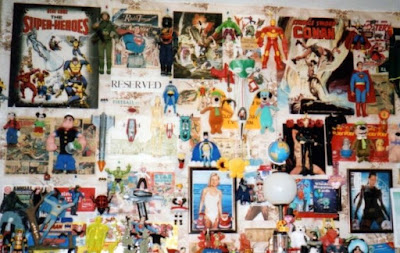 The ageing process is a curious thing, in that its effects are gradual and don't usually register with us until they've gathered a fair bit of steam.  This applies not only to ourselves, but also our possessions.  Take my bedroom walls for example, or to be more precise, the posters, pin-ups, pages and pictures which adorn them (and are somewhat obscured in the accompanying photo by some of my collectables).

Most have now been in place for at least 30 years (though some go back nearly 40), but it's only in the last couple of years or so that it began to dawn on me just how faded, tanned, and wrinkled many had become, prompting me to begin the time-consuming task of replacing them with brighter, newer, and more colourful duplicates.  I've now renewed around 80 of them, and my room looks all the better for it, but it occurs to me that I'm living in a 'vanished age' which I've preserved by means of a scanner and printer.

Some were replicated by scanning the originals and digitally restoring them, others by scanning spare issues of the comics they came from - some purchased at the same time as the originals, others a few years afterwards (and a good many years ago).  Truth to tell, many of the wall pics had probably begun to look old quite a while back, but it wasn't until they became noticeably mottled that I realised time had taken its toll and decided to do something about it.  However, when younger, I'd probably have just replaced them with new (and different) posters and pin-ups, so why indulge this odd compulsion to preserve things the way they were?

I think I know the answer.  As regular readers of my other blog may be aware, my family originally lived here (in the house I currently occupy) from 1972 to '83, whereupon we moved to another house in a different neighbourhood and resided there for just over four years before returning to our former home.  Not wanting to move from this house back in '83, I felt like one who'd been "from the room untimely ripped" (to misquote Shakespeare) and this made me want to re-create (as much as possible given the different dimensions of my new room), the ambience of my old one.

Had we never moved, this desire to replicate my former surroundings would likely never have occurred to me and, as I said, I'd probably have replaced time-worn pictures with new and different ones when the occasion required.  The irony is though, that even if we'd never moved, my room couldn't have remained the same anyway, as I'd have had to remove my 'wall adornments' to accommodate renovation and refurbishment to the house a mere year or three down the line. (Thankfully, we were spared that inconvenience.)

This would've meant being decanted to a caravan for a fortnight (with furniture and possessions put into storage) while the house was gutted of original fixtures and fittings, then rewired, re-plumbed and, where necessary, re-plastered.  (New wall sockets and light switches were installed, but not in exactly the same spots, hence remedial work being required on the walls.)  Upon completion, the entire house would've needed redecorated, and as some of my old pictures were glued to the wallpaper, I'd more than likely have just put up new ones.  However, not happy at moving, my reluctance to abandon the warm familiarity of my former surroundings inspired me to try and re-create them in my new room, and again in my old one when we returned.

I've never managed to shake that compulsion, so now sleep in a room that's largely the same as it was between 1975 and 1983, resulting in me living in a bygone age that vanished into the mists of time 35 years ago.  I can only conclude that moving to another house in '83 was a traumatic experience for me, and one which affects my outlook to this very day.  Or it could be that I'm just bonkers I suppose, but if you agree with that diagnosis, I'd much prefer you kept it to yourselves.  After all, you know what a timid, sensitive soul I am, so there's no need to be cruel.

Thoughts, theories, observations or empathy can be left in the considerately-provided comments section if you feel so motivated.
Posted by Kid at 03:21