I was in the back garden filling my bird feeders the other day (as I do every day) and, coming in through the porch door, I spied scratches in the paintwork on the lower part of the exterior of the kitchen door in front of me.  I'd seen them before, naturally (many times), but so used to them am I now that they don't really register with me anymore, so why they did on this occasion I'm not quite sure.

The scratches had been caused by not just one dog, but three.  First, PRINCE, a mongrel we'd owned back in the early '70s that looked almost like a 'miniature' German Shepherd;  then TARA, an actual German Shepherd we owned from around the mid-'70s to 1986.  Finally, ZARA (another German Shepherd), who I'd bought to replace Tara when her time had come to an end earlier in the same year.

What's interesting though, is that we'd moved away from this house in 1983, when Tara was eight and a half years old.  Tara died three years later, which is when I got Zara - and a year after that we moved back to our previous house (as regular readers will be tired of reading).

So what's interesting about that?  Well, the back door of that other house likewise has scratches from both Tara and Zara (made when they were seeking re-entry after being out in the garden 'watering' the plants), so both houses bear the marks of the same two dogs, but, in the case of this house, made with a four year gap between them.

It had occurred to me a few years back to fill in the scratches, but now I don't think I'll ever bother.  It's somehow oddly reassuring to see the 'footprints' of our three dogs still there after all this time (Zara died just over seventeen years ago), as fresh as when they were first made.  It's as if Prince, Tara and Zara are still around in some way.

In fact, sometimes, when the wind is howling late at night, I seem to hear scratching at the back door and a muffled whining, as if something is seeking shelter from the elements.  My first thought, of course, is that my ears are playing tricks on me, but then my curiosity kicks in and I make my way through to the kitchen to check things out.

Whenever I open wide the door, however, only the inky blackness of the night beyond stares back at me - but the unmistakable smell of doggie fur hangs in the midnight air, as if I've only just missed a canine visitor or three wishing to remind me that their spirits yet linger out in the garden in case I should ever forget them.


Finally managed to find some pictures of Prince.  The original photos bear the printed date of July 1974 in the margins, but whether this is when they were taken or developed, I'm unsure.  If the latter, there wouldn't be much of a gap between the two occasions.  Alas, poor Prince.  We only had him for about a year-and-a-half.  In fact, as I've only got three photos of him, I might as well show them all here. 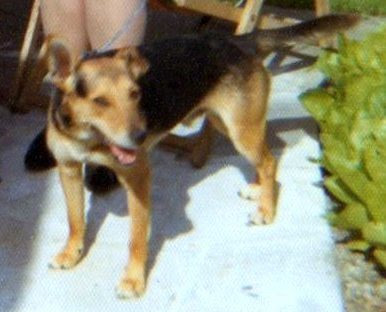 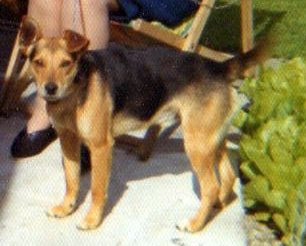 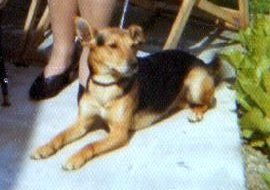