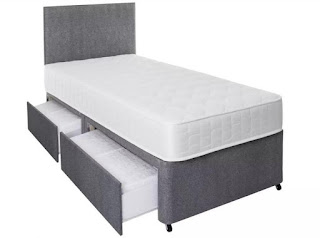 I was lying on top of my bed earlier, dozing (something I do a lot of these days), and it's surprising what one's mind can turn to in a semi-somnambulistic state. My thoughts turned to a bed that I owned from around the mid to the late '80s, one which one of my friends had put a deposit on, but then decided he didn't need (or want).  He'd seen it in a local shop, and it was going for a silly price because one of the support slats was broken, so he put down a deposit on it and intended to pay the balance when he could afford it - then changed his mind.

The broken slat didn't bother me, because I knew I could replace it with not much bother, so I gave my pal his deposit amount (£5 I think) and paid the outstanding tenner (told you it was cheap) to the shop.  That's how my second bedroom of the house my family was living in at the time became a bedroom in fact and not just in name.  A couple or so years later, my family returned to our previous house, and the spare bed took up residence in the room I used as a studio.  However, space was tight because of all the stuff I'd acquired over that couple of years, and the larger of the two rooms was slightly smaller than in the other house.

Meanwhile, my friend had moved into a flat with his girlfriend and their baby boy. They had a cot (if I remember rightly), but thinking ahead, they decided it would be nice to get a bed for their son that he could grow into.  I said he could have the bed I'd bought in his stead, and thus it passed into the possession of its original intended owner.  Fate, or what?  I no longer recall whether I gave it to him gratis or he reimbursed my initial outlay, but it was satisfying to see the bed united with the very person who'd originally planned to buy it.  (I kept the headboard I'd chosen and paid for separately, and it's on standby just in case I ever need it.)

Sometimes, though, my mind returns to when it resided in my second bedroom of the house I lived in when I first bought it, and I recall lying in it at night as the wind blew through the trees at the side of an adjacent field, and the rain lashed the window of my cozy, comfortable little room as I huddled under the blankets, impervious to the external elements that raged beyond.  Who doesn't love nights like that when they're snuggled up safe in bed, eh?

(Incidentally, that's not the actual bed in the photo - just a generic stand-in.)