I HAVE OFTEN WALKED DOWN THIS STREET BEFORE... 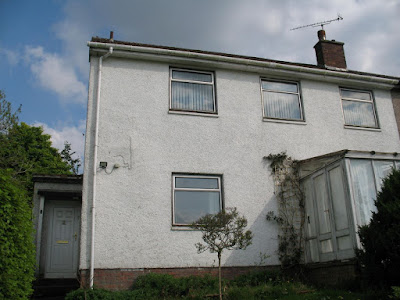 The street in which I live is a long, winding, twisting, turning snake of a street with nearly 200 homes in it.  Towards the late '70s, I had two friends who lived in the street, but nearer the beginning than I was.  In fact, one lived in number one, the other half-a-dozen houses further up from him.  Neither of them live there now, having moved out decades ago, but their parents (then, with the passing of time, a parent in each case) continued to inhabit their long-term domiciles.

Last year, the father who lived in number one sadly passed away.  He was a very well-educated and extremely intelligent man and whenever he saw me, he'd say "Hello Kid" (yes, even my friends' parents usually addressed me by that singular appellation), and I'd stop and have a blether with him.  Sometimes, on my way to the shops, I'd chap his door to see if he needed anything, but his family, though no longer in residence, usually made sure he was well looked after, so there was only one occasion when I was of use to him for a couple of items of shopping.

Anyway, since he died, whenever I've been passing his house, I've always looked over and given a nod in its direction, just out of respect for him.  Yesterday, however, I saw a 'sold' sign at the entrance, which surprised me as I'd never seen the 'for sale' sign that would normally have preceded it.  It's sad that my slight historical connection to the house has come to an end now that it's passed into the possession of another owner, but I don't think I'll ever be able to pass it without giving it a nod of acknowledgement when I do.

Today, I went around with my camera and snapped a few photos of the front and back, as it's unlikely I'll ever again set foot on the path and steps leading up to the front door.  Casting my mind back, it was in one of the bedrooms of the house that I scored my first '180' at darts sometime around 1982, and I well remember the apoplectic fit my friend's brother had in frustration at me gubbing him at the game he seemingly thought he was superior at.  And maybe he was, but not on that particular day.  Ah, happy memories.

However, I'm becoming all too aware that, with the passing of time, more and more familiar places are passing beyond my reach - or disappearing altogether - and it's a sombre and scary reminder that all things must pass, and that eventually there'll be little or no signposts to my youth left to take comfort from.  I used to be able to visit my old primary schools whenever there was a jumble sale, but they were demolished around 6 or 7 years ago, so I can no longer walk the halls of youthful academia.  Friends have moved or died, so I can no longer revisit the interiors of their houses I was so familiar with when I was a kid or teenager.

I don't know about you, but I miss being able to reconnect with certain aspects of my past due to people or places no longer existing, or for whatever reason it might be that prevents me doing so - like a friend's familiar house now belonging to someone else.  Previously, I knew that if I wanted to chap the door of the house under discussion, I'd be made welcome and given a cup of tea and a biccie.  The fact I knew I could meant that I didn't avail myself of such hospitality as often as I might have, but now that it's forever beyond me makes me kind of sad.

Any of you feel the same way when such things happen to you, or am I just a great big overly-sentimental wussy-boy who should toughen up and just get on with things?  Make your feelings known.