A DIMINISHING BACKDROP OF DAY-TO-DAY LIFE... 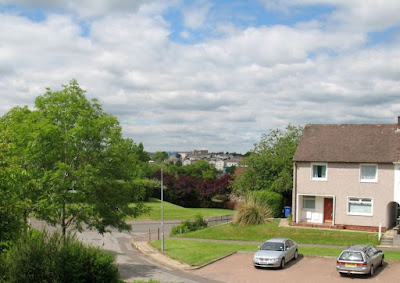 Isn't it strange how the 'backdrop' to your life can change without you being aware of it until after-the-fact?  Example: There's a fella and his wife lived in the flats around the corner from me (same street) for at least 35 years, possibly longer.  He was there when we moved back to the neighbourhood after four years away, and for all I know he might've been there when we still lived here the first time.

The pair of us were part of the local doggie-walking club in the late '80s until either the dogs or the owners gradually died.  Out of about 14 of us, maybe only about four yet survive (all the dogs are gone), though me and Martin (as he's called) were the only two still in the area.  I'd often run into him when he was out walking his new (relatively-speaking) pooch, or when one of us was going to, while the other was coming back from, the local shops.

Anyway, last week I was sitting on a bench in the shopping area, scoffing a soft buttered roll with link sausages and fried onions (yum), when I spotted Martin and hailed him.  During the course of our chat, imagine my surprise when he told me that he and his wife had moved from their flat to a house in another neighbourhood quite a distance away around five weeks or so before.

Subconsciously, I'd yet imagined he and his dog were still traversing around the local environs when, in fact, his daily routine now unfolded somewhere else entirely, and that it was unlikely that either of us would run into the other when heading to or back from the shops.  But there was even worse news to come.  After being in their new house for only around three weeks or thereabouts, Martin came home one day to find his wife Isobel dead from a massive heart attack.

Sadly, I didn't know her very well (only saw her a handful of times in 34-odd years), but what a bummer, eh?  He's no longer in the flat where he and his wife brought up their kids and made many happy memories, but he's now in a house where he was denied the time to make any meaningful new memories before she was so suddenly and cruelly taken from him.

I prefer to think that Martin still lives around the corner from me and is yet exercising his doggie around the neighbourhood, and whenever I look out of my window, I sort of imagine I've just missed spotting him by seconds.  That way I can pretend that everything is as it's always been (for the last several years at least) and that the friendly face of a decent bloke is still out there to say hello to, instead of in another neighbourhood that I'm unlikely ever to visit.

Two more long-term residents in the street are soon to flit from it, and I'm beginning to feel isolated from friendly faces that have been part of my everyday existence for decades.  It's no fun seeing them all moving (or slipping) away, especially as I well-remember when my family was the new one 'on the block'.  That feeling is long-gone, but somehow I find myself wishing I could re-experience it - without having to flit somewhere else in order to do it though.

Any of you fellow-Mellows ever feel the same?  Or am I just bonkers?  And spare a thought for Martin, eh?