FINALLY - THE FULFILMENT OF A FAR-AWAY PROMISE... 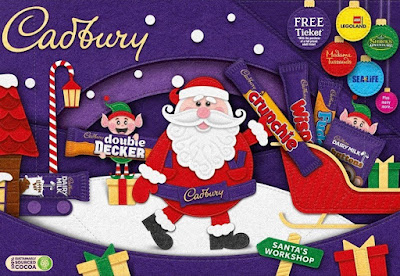 "A promise made is a debt unpaid" is an old but true saying, and I recently fulfilled a promise (and paid a debt) over a whopping 50-plus years after making it.  I told you in a previous post how my neighbours, Robert and Elaine, back around 1969-1970, gave me a Santa Claus cake-topper I'd coveted, for which I'd promised them a Christmas selection box in exchange.  That was the deal I'd proposed, but because they asked for time to consider, I thought they weren't going to go for it - until said Santa, wrapped in Christmas paper, was pushed through my letterbox five or ten minutes later.  In the meantime, me and my brother had scoffed most of the contents, leaving only a Bounty bar to complete my side of the bargain.  As I chapped their door and shamefacedly handed it across, I promised I'd give them a full selection box at the earliest opportunity.

There's another old saying - "The road to Hell is paved with good intentions", and I never did get around to fulfilling my promise and upholding my side of the deal before we flitted sometime after.  It always bothered me slightly, and I was determined, one day, to do the right thing, but the years came and went without me ever doing so.  Sadly, Robert died at the beginning of last year, but (on the run-up to Christmas) I got his widow's and sister's addresses from a mutual friend and sent each of them a small selection box (with an explanatory note) to finally fulfil my long-ago promise.  They were nothing fancy or expensive, merely a modest token to show I hadn't forgotten and, if I'm honest, to ease my conscience by doing what I should've done over 50 years ago.  I regard the two selection boxes as two halves of the same one, as obviously the original promised item would've been divided between Robert and Elaine.

So am I blowing my own trumpet here and seeking recognition for finally doing the right thing?  Not a bit of it, because taking over 50 years to do it puts me in a bad light more than a good one, but I do feel a bit of a weight has been lifted from my shoulders after several decades.  Hopefully, Robert's widow and his sister will appreciate the thought behind the gesture, and recognise it as my attempt to make good on a never-quite-forgotten promise that took far too long to complete.  And hopefully Robert is looking down and saying with a wink and a smile, "Good on ye, Gordie, I knew you wouldn't let us down in the end."  So here's to Robert - I was thinking of him at Christmas and fondly reminiscing about when we were kids with forever seemingly ahead of us.

Do any of you have any unfulfilled promises you once made that nag at your conscience?  And do you still fully intend to make good on them one day?  Alleviate some of your guilt by sharing them with your fellow Mellows in the comments section.