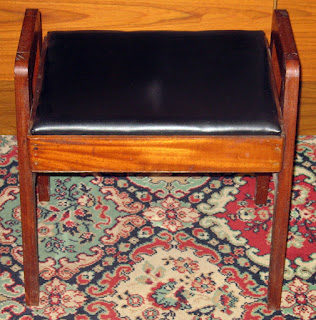 I don't remember the precise year - or even the month, come to that.  June or July perhaps?  Whether I was yet a schoolboy or had left my educational environs is another thing beyond my ability to recall.  At a guess I'd say it might've been around the mid-'70s upwards, but I couldn't swear to it.  I do remember it was a sunny Saturday, maybe late morning or early afternoon, and I was making my way down to the local town centre, which took me past a church in between my house and the shops.

On the path leading from the church, I saw my father, coming in my direction and carrying a stool-type piece of furniture he'd just acquired from a jumble sale in the church hall.  He asked me if I'd carry it home for him, but I was eager to get to the shops and so resisted his invitation.  It would mean retracing my steps home and starting again from scratch, and as I was already at least halfway to my intended destination, it wasn't a delay I was prepared to undergo.

The stool wasn't heavy, but my father wasn't exactly what you'd call a healthy specimen, so had I been a good and dutiful son, I'd have obliged him.  But no, I was eager to be off on my adventures, so my father had to carry his burden home by himself.  Yes, I was a bit of a b@st@rd, wasn't I?  Anyway, my father survived his trek, and the stool ended up in my bedroom, though whether he'd bought it with that intention or had just succumbed to a whim with no thought as to where the item would go is lost to history.

Over quarter of a century ago, I re-upholstered the 'lid' of the stool with a material that matched the original and restored its appearance to that which it had before it came into my possession.  It still sits in my bedroom and whenever I look at it, I feel a pang of guilt at my callous cold-heartedness in not being prepared to (slightly) inconvenience myself by carrying it home for my father.

Funny the effect time has, isn't it?  I'd like to think its passage has made we wiser and even kinder (though I doubt the latter), and that, were I to have that moment again, I would acquiesce to my father's request and spare him the effort of trudging home with the load on his own.  True, he could have stopped and rested whenever he felt the need to and taken the weight off his feet by sitting on the stool, but I take no comfort from that realisation and still feel like a bad 'un for being so selfish.

Decades later, the 'sins' of the past yet haunt me and hold me to account.  And perhaps that's just how it should be if there's to be any kind of justice in the world for missed opportunities of acts of kindness and decency.